A while back I made a nostalgic impulse purchase on eBay and ended up with a Commodore 64 – a real breadbin style one, with no emulation in sight.

This was my first ever computer and I have fond memories of playing countless games, waiting patiently for things to load from tape, and borrowing library books to learn how to code. It literally was my gateway into the computer world.

The machine I bought was a fairly simple bundle – just the computer itself, boxed, with power supply. It arrived a few days later and I was amazed at how small it is. 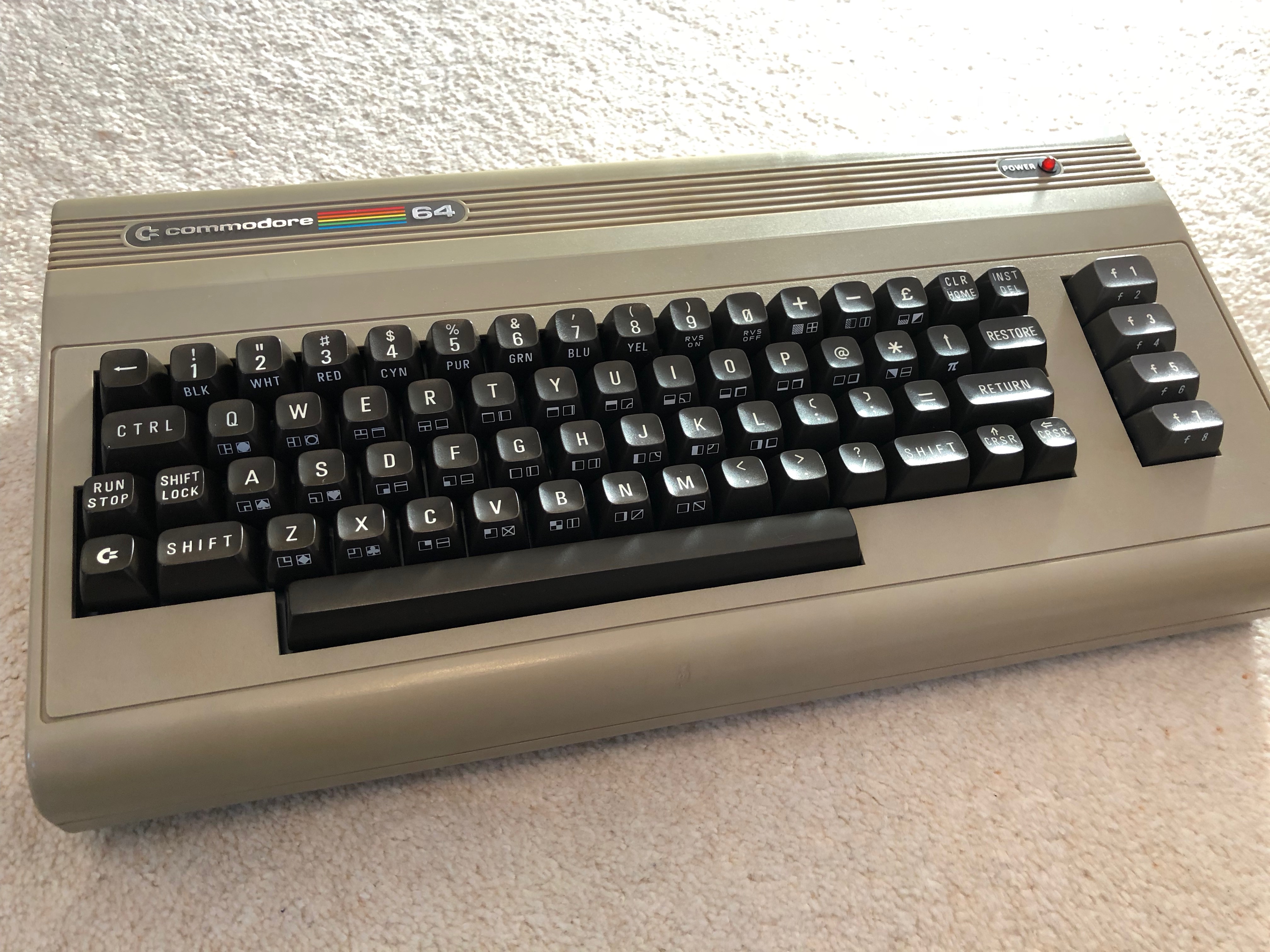 I spent time cleaning 35 years of accumulated gunk. Everything seemed in pretty good shape, with labels in place, no significant plastic yellowing, and just a few scuffs underneath.

My first problem was that the Commodore outputs an analogue video display, and all my displays are digital. Without a display I can’t see if the machine works.

Speaking of which, I didn’t even know if it worked. The computer was advertised as being untested – a common term for broken – but I’d assumed it just hadn’t been used in 30 years.

Should I ever get it to work and displayed on a screen I then faced the problem of having no media, and no joystick. A problem for another time.

As expected, there are devices that convert the analogue signal to digital, and I went with an s-video/composite to HDMI convertor.

The C64 outputs a composite signal, but through a special DIN connector. I found a wiring diagram online, ordered some parts, and built a shoddy adaptor.

Now that I had a compatible display it was time to try the machine out.

First I just plugged it in and switched it on. Nothing happened.

A visit to YouTube showed me that pretty much everything inside the machine can fail. None of it sounded fun. The power supply was the first place to look at as these are notoriously poor quality (I remember warming my feet on mine, back in the day).

Using a multimeter I attempted to read the power coming out of the supply. At first I think I got some values, but on checking again I got nothing so I either fried the supply in reading it, or it was on the way out and died.

I didn’t want to buy an old power supply. I read that the supply is unusual in that it outputs both AC and DC power., This got me to wondering if I could get separate AC and DC power supplies and feed them into the computer’s power socket.

I found a 5V/1.5A DC supply from a USB hub I had lying around the house. This matches the DC requirements.

I ordered a 9V/1A AC adaptor from the internet – this was much harder to source. Mine ended up having a euro connector, so I also needed an adaptor on top. It’s quite a frankenpower supply.

Both of the power supplies had a 2.5cm barrel plug, so I ordered two barrel sockets as I didn’t want to butcher the cables.

The C64 power is supplied through a 9 pin DIN plug which are still easy to get hold of.

Not bad, although another soldering horror job inside. The cheap component parts didn’t help, melting somewhat.

Now I’ll state that I have no knowledge or experience of electronics, and the double-supply I built may be extremely dangerous, may instantly catch fire, or may somehow create a small black hole.

I plugged everything in – the C64 now sporting 3 power supplies (the video convertor needs one too) – and switched it on. The red LED came on, the monitor went black, and then the pale blue C64 screen appeared with a full complement of memory. Hurrah! 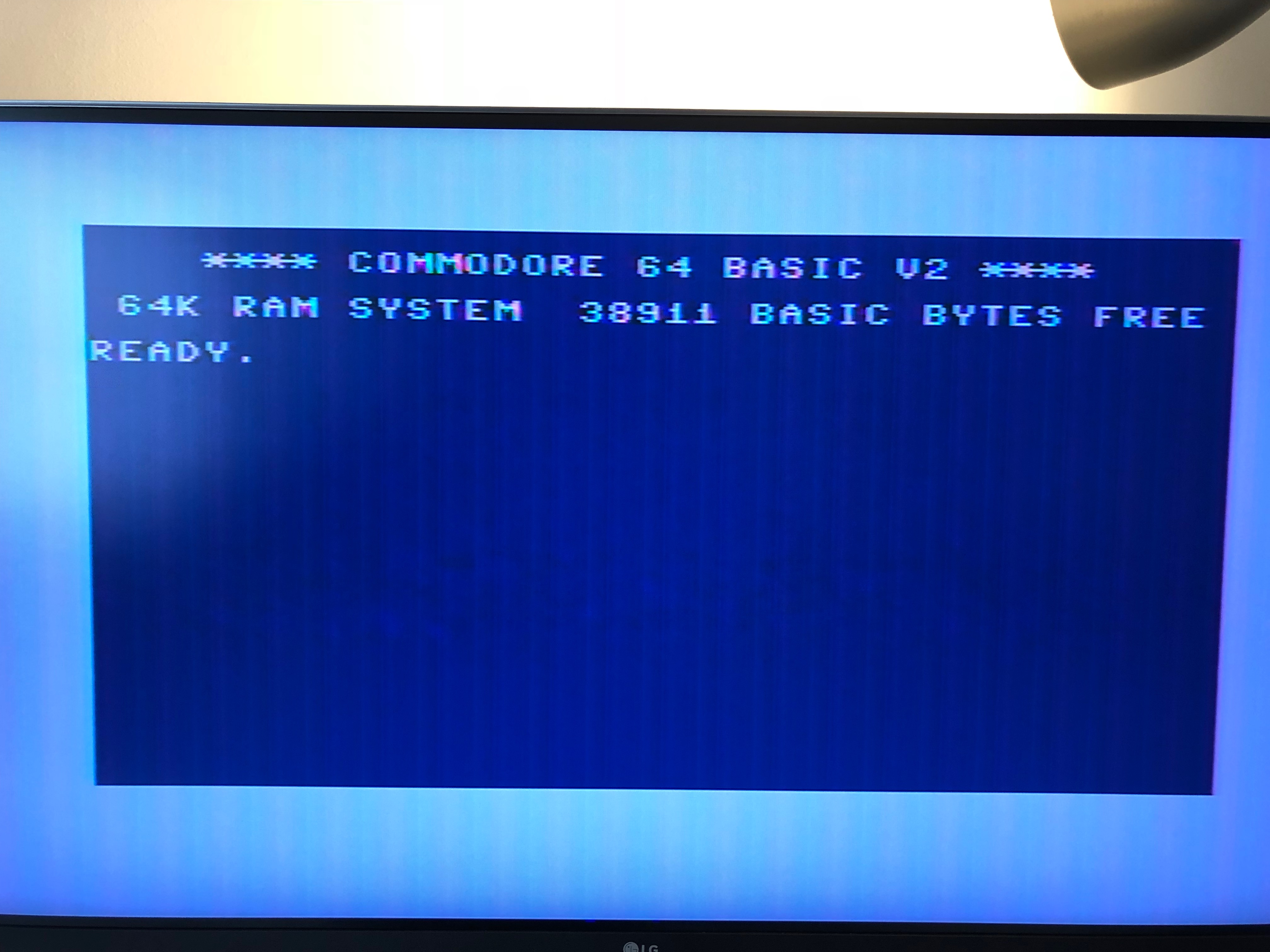 It’s a bit fuzzy and that may be due to the video cable I made. I’ll try another soon.

I don’t know if the SID chip works, and I don’t know if it can play a game. There are devices you can buy that take an SD card full of files and emulate a disk drive to the C64. That’s something for another day.

My joy at making something that worked was a little tempered when I reassembled the C64 and managed to crack the brittle plastic with the screws. Also, I have a spare screw I can’t find a home for. Annoying.